Tupungato Winelands extends to the foot of the Andes, in the heart of the Argentina, under the watchful eye of the Tupungato volcano and the Cordón del Plata,

This complex of 800 hectares, inserted in the most fertile and picturesque wine region of Mendoza, combines vineyards and residential areas, golf and polo clubs and a complete infrastructure of services, tourism and social, thus becoming the first integral initiative of wine country club worldwide.

The imposing landscape determined by the impressive views of the Cordon del Plata and the Tupungato volcano, together with the broken topography, with hills and canyons, were specially used to generate the urban design and specifically the design of the 18-hole golf course.

The Tupungato Winelands golf course is 1,200 m high and its design is based on an integrating approach of all the components, landscaping and urban planning, of Tupungato Winelands, such as the lots, the hotel and the polo fields.

This golf course is the first in Argentina where the grass is watered only around the fairways and greens. In this way, the native vegetation is respected and the topography is used, while respecting and enhancing the landscape of the area and its vegetation.

The design of each hole is based on a strategic design of risk and reward. That is why there are multiple lines of play that challenge golfers to analyze and choose one of them according to their playing styles. Each hole has at least five tees, including championship and junior tees.

The first 9 holes of the course were inaugurated in March 2010, along with the starter and the restaurant, all in operation and open to the general public.

Each land as the permission to build a house on it and have an associate vineyards field. The sell field with his vineyard planted in 2011, has a good production of Malbec (about 20.000kg/year for about 7$/kg). For now, the production are used to paid the workers and the wine production process but the wine and vineyards get valued with time.

If you always wanted to own YOUR wine, you knock at the right door!

Development Land On Vancouver Island BC, Canada. One of the hottest real estate markets in Canada !!! 195 BCT July 2017 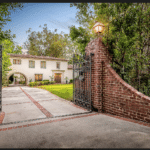