A new theory for a universal digital barter system.

By soaring 4.4% to new record highs Wednesday after the release of a report that showed U.S. inflation hit its highest level in 31 years and then losing all of that in the day, bitcoin played straight into the hands of mainstream economists who pooh-pooh its potential as a currency.

Such volatile moves, they will argue, make it impossible for cryptocurrencies to serve what traditional economics describes as the three functions of money: i) a medium of exchange, ii) a store of value, and iii) a unit of account. A currency cannot play those roles, the argument goes, if its value is moving around so much without any predictability.

That sounds almost irrefutable, right? But what if the three functions framework is based on a flawed, or overly narrow, definition of money?

You’re reading Money Reimagined, a weekly look at the technological, economic and social events and trends that are redefining our relationship with money and transforming the global financial system. Subscribe to get the full newsletter here.

In “Money: The Unauthorized Biography,” Felix Martin argues that through history people have tended to wrongly think about money as a “thing” (such as a banknote or a chunk of a precious metal such as gold) and not for it what it is: a socially invented governance system for tracking transfers of property and clearing debt in a commonly trusted manner. By viewing money as something to be owned and accumulated, we’ve fetishized currencies rather than treating them as a means to an end.

In Martin’s construction, a country’s or an economy’s universally accepted currency is the thing. It is not the money. The currency is merely a tool that makes it easier to carry out the extremely difficult task of recording, counting and valuing transactions across a community of otherwise untrusting strangers.

In this way, cash can be viewed as a decentralized, peer-to-peer record-keeping device – as if by me giving you $10, my anonymous account in the dollar economy is debited by that amount and yours is credited. If you deposit those funds into a bank, you move the account into a different accounting system, but it’s ultimately serving the same function.

Will the Holiday Season Bring Gifts or a Lump of Coal for Bitcoin Investors? 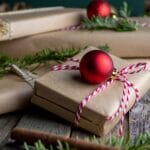 Staples center in Los Angeles to be renamed Crypto.com arena.