A new digital currency called “bitcoin cash” (BCC), created by the splitting of the bitcoin blockchain, is rapidly rising in price despite lacking crucial support from parts of the cryptocurrency community.

“There’s no infrastructure available out of the box, to support BCC,” warned Fran Strajnar, co-founder and CEO of data and research company Brave New Coin.

“The network needs further support and infrastructure needs to be as easy as bitcoin; otherwise it’s over for BCC,” he told CNBC via email on Wednesday.

The new currency token, “bitcoin cash”, was created on Tuesday when a section of the bitcoin community forced the blockchain (the digital ledger which records every bitcoin transaction) to split into two separate chains.

Everyone who held bitcoin before the split was entitled to the same number of “bitcoin cash” tokens, effectively receiving a free dividend.

In the hours after the blockchain split, the price for the new token fell close to $214, according to CoinMarketCap. But the price has since rallied as more transactions of the new token take place. It is currently trading around $628.37. 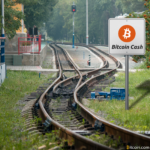